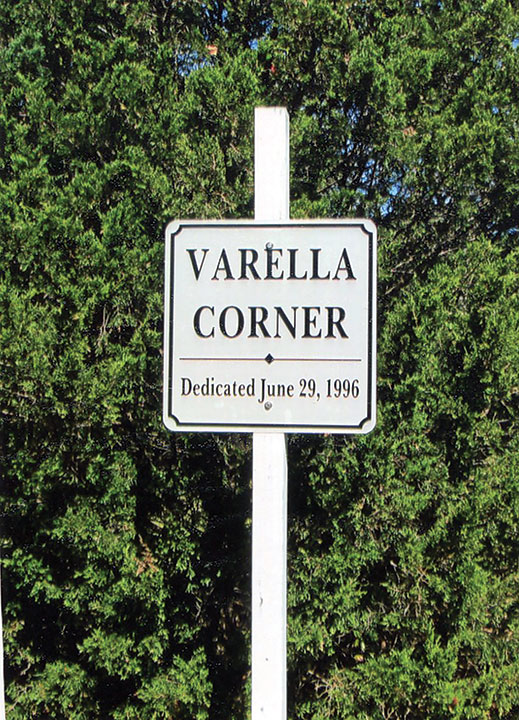 As you drive around Rochester, you may have noticed corner signs honoring some of her citizens. At the curve in the road where High Street bears onto Walnut Plain Road and on the edge of the old Varella cranberry bog there is a sign for Varella Corner. There is also a plaque which reads:

In memory of Bernadino

The long journey from Cape Verde

The story of Bernadino H. Varella is one of both perseverance and endurance. Bernadino was born in the Cape Verde Islands in 1851. There he grew up and married Christina Moreira and they had two daughters, Matilda and Ana. In 1884/85, he left his wife and daughters now one and two years old in Santiago, to make money whaling. He was gone for 17 years and during that time, in 1900, he arrived in Rochester. (As the whales became over-fished and whaling less profitable, some crew members who ended voyages in New Bedford found work in neighboring towns). Bernadino found jobs as a laborer and sawmill worker for Charles Douglas. In 1901, having established himself, he returned to Cape Verde to gather his family and bring them to America.

At this time 18 year old Matilda was betrothed to Manuel Cabral and one week before the family’s departure date, the two eloped and once married, returned to join the others on the trip to America. The sea voyage on the schooner “Notice” lasted for an incredible 73 days. In the beginning the ship was slowed by calm seas, but then was caught up in dangerous storms. The ship lost its mainmast and was stranded at sea. The ship’s captain, believing that all was lost, jumped overboard.

Together Bernadino and the ship’s pilot took charge. They calmed the passengers, rationed food and drink, and maintained order, as they waited for rescue. The story handed down over the years, is that Bernadino, fearing that the ship would sink before rescue came, tied his family together with a rope, so they would be together if the “Notice” went down. Fortunately, an Italian steamer came across them and was able on its second attempt to tow them to port.

Bernadino and family finally made it to Ellis Island on August 6, 1902, and that same day the family group was “granted lawful admission for permanent residence”. Now 50 years old, Bernadino settled his family into a cottage at “Old Tuck” in Rochester. They lived there for a year before he bought 15 acres of land and they moved to this new homestead where they farmed, planted a cranberry bog, and opened a grocery store.

Bernadino became “Ben” to his friends and “Black Ben” (to distinguish him from another Ben) to the predominately white community. Over the years, he was a foreman and builder on numerous cranberry bogs. His store catered to both Cape Verdeans and non-Cape Verdeans. In 1912, he was able to buy the Douglas property on which he had once labored.

Bernadino Varella was a leader of the Cape Verdean community. He died August 27, 1920 at the age of 68, leaving behind many descendants.

By Connie Eshbach, via The Wanderer (see original article)