Words Of Our Own 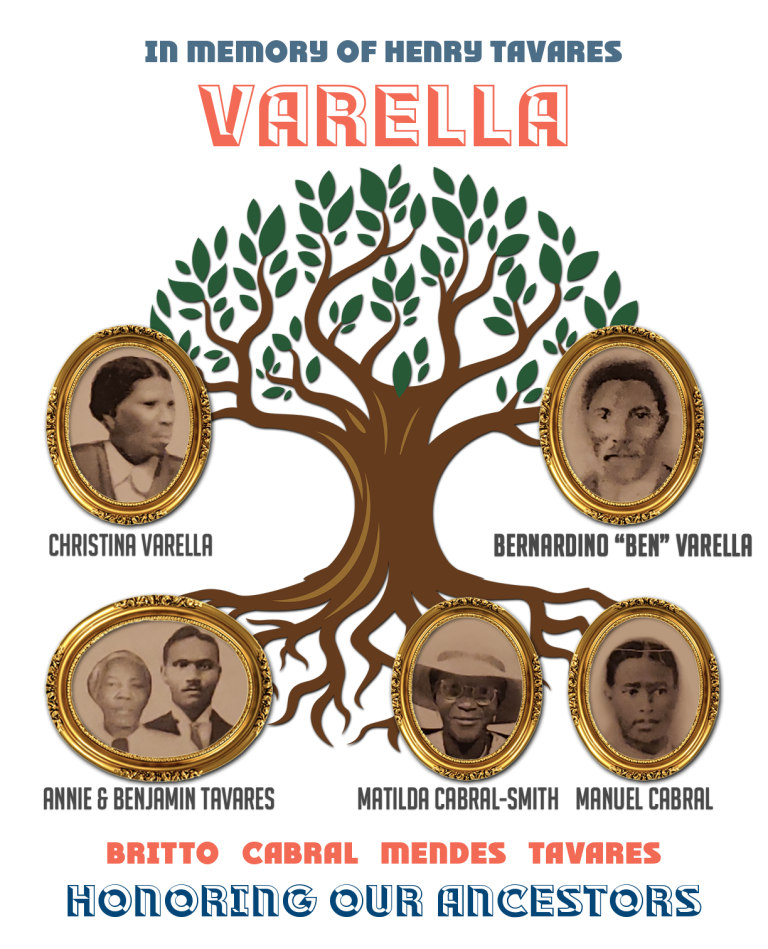 So here we are today looking back at how our lives mirror our ancestors. They stood for equity, they were farmers, advocates, activists, innovators, and the first of many,  community builders, caregivers, and entrepreneurs and we look forward to continuing their legacies. as we begin to restore A.V. Rose Farms.

Our families’ story about my great great great grandfather Bernardino H. Varela coming to America in 1884 and his travels back to Cape Verde to get his family when the boat started taking on water. He tied everyone together so they wouldn’t get separated. They were rescued by passing Italian steamer and brought to Ellis Island NY August 6, 1902, and my family was granted lawful admission for permanent residency. Bernardino H. Varela, was affectionately called “Big Ben”, he was a whaler around 1900 he landed in Rochester, MA and started working for Charlie Douglas. He later bought property from Charles Douglas, the first records go back to 1912. From the time the property was purchased farming become the primary source of income of most of my families history. Cranberries were our primary crop, but we grew beans, potatoes, carrots, peas, corn, cabbage, blueberries, strawberries and more. Our family has always grown and given to our communities and those that didn’t have, to make sure we were all good. In the 1990s the midwest started developing cranberry bogs, make the cost of cranberries majorly drop, sending cranberry growers into a financial crisis and pushing us back into the workforce. When Big Ben died his wife, Christina took over. She was a force, a woman of many traits —working the land and buying more family property in Rochester, MA.

Today we are using A.V. Rose Farms to honor and expand that legacy and spirit. – Bernardino H. Varela, the Alexanders, Varelas, Cabrals, Tavares, Mendes, Lopes, Thompsons, Brittos, Gomes and the Roses by carrying on the traditions of agricultural prosperity, sharing and teachings, while foraging a sustainable future.

OUR HERITAGE: THE LONG JOURNEY

BERNARDINO H.VARELA was born in 1851 in the Cape Verde Islands, probably the Island of Santiago (Isle de Santiago). He left Santiago in 1884 or 1885 on a whaling ship bound for the United States, leaving behind a wife, CRISTINA MOREIRA VARELA, and 2 very young children, MATILDA and ANA (ages 2 and 1, respectively). It was 17 years before they saw him again.

Bernardino spent most of the next 15 years traveling about, presumably engaged in the whaling industry. Most of this time was spent in Hawaii and California. He landed in Rochester (Massachusetts around 1900. He was employed by one Charlie Douglas, working as a labourer and at the Douglas Sawmill, one of several located in the general vicinity. (Bernardino was later to purchase the Douglas property, which at his death passed into the hands of his daughter Ana and her husband. This is the very property on which the Tavares “big house” is now located.) 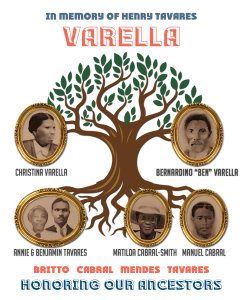 In 1901, one year after settling in Rochester, Bernardino made the journey back to Cape Verde and gathered his family to bring them to America. His older daughter, Matilda (now about 18), was betrothed to one Manuel Sanches Cabral. The couple eloped only one week before the family was due to leave the island. Thus, when the time came to depart, Bernardino’s family included Manuel and Matilda Cabral, Ana, and Cristina.

The journey to America was made aboard the schooner “Notice” and took 73 days. It was a perilous journey. The ship was slowed by calm seas and then was caught up in stormy weather. Its main mast was lost in a storm, leaving them stranded at sea. The ship’s captain, certain all was lost, jumped overboard. Bernardino and the ship’s pilot took charge, calming the passengers, rationing food and water supplies, and maintaining order.

It’s not known how long they remained in these circumstances. The story goes that at one point Bernardino tied his family together with a rope so that they would not be separated when the ship went down. However, as destiny commanded, the “Notice” was rescued by a passing Italian steamer. A line was attached to the ship and she was towed to port, though the rescue was not without its difficulty and drama. The first time the steamer attempted to tow the “Notice” the line broke. Thankfully, the steamer returned and successfully fastened the rope to the disabled ship.

Bernardino and family arrived at Ellis Island (New York) on August 6, 1902. The records of the Immigration and Naturalization Service indicate the following persons were granted lawful admission for permanent residence on August 6, 1902:

Bernardino, Cristina, Manuel, Matilda, and Ana settled in a cabin at “Old Tuck”, where they liver for one year. Bernardino then bought some property (about 15 acres) from a minister named ‘Sweet’ and moved the entire family to the new homestead. He farmed the land, planted his first cranberry bog, and opened a grocery store during the period that he lived here. This property eventually became a part of the Varela/Tavares estate and remained in the family until sometime after Ana’s death in 1961.

In early 1914 Manuel and Matilda purchased their own home and property from the Stuart family. Januarius ‘Mahoney’ was born on April 14,1914, shortly after his parents moved to their new home. This property remains a part of the Cabral estate and is where ‘Mahoney’ Cabral now makes his home.

Manuel Cabral died in an accident in October 1914. A tree fell on him during a wood chopping expedition. Matilda was left a widow with 3 young children. .(Her oldest, Flora, was being raised by her grandparents, Bernardino and Cristina.)

In the meantime, Bernardino, known as ‘Ben’ to his friends and as ‘Black Ben’ to the predominantly white community in Rochester (to distinguish him from another Ben in the community), worked as foreman and builder of numerous cranberry bogs in the area. He was apparently highly regarded by the total community and was considered a leader of the Cape Verdean community, since he was one of the first of that group to arrive on the shores. Apparently, his command of the English language was better than many others who arrived had arrived later. He also had a somewhat ‘worldly’ knowledge, given his travels and experience.

Bernardino’s grocery store was patronized by both the Cape Verdean and non-Cape Verdean community. His daughter, Ana, who had attended school for 3 years after her arrival in America, helped him to run the store. Goods were purchased from a wholesaler in New Bedford. The wholesaler was one Frank Clark, who later was to finance Ben’s purchase of a second piece of property, the estate of Ben’s first employer, Charlie Douglas. This property was purchased around 1912.

Ben, Cristina, and Flora moved to the new property in or around 1912. Ana remained at the old homestead with the man she had married on July 3, 1910, Nicholas Tavares. Nicholas had immigrated from Santiago, Cape Verde (Tarrafal) one year prior to the marriage, in 1910.

Ana and Nicholas subsequently had 6 children, including one set of twins.
They were:

After Ben’s move to the Douglas property, he sold the old homestead to Ana and Nicholas.

Ben cultivated several of the cranberry bogs which are still part of the Tavares estate. He lived and farmed there to the end of his life. He died on August 27, 1920, at age 68, after a long illness which left him blind in his later years.

After Ben’s death, Nicholas Tavares moved his family to the ‘big house’ and continued the tradition begun by Ben Varela. He assumed the mortgage that was left on the property, cultivated additional cranberry bogs, and farmed the land. Flora and Cristina continued to live on one side of the house, while the Tavares family occupied the other.

Cristina Moreira Varela died on May 11, 1932, of a cerebral hemorrhage.

The heritage left by Bernardino and Cristina Varela has enriched the lives of a long line of descendants. Today we are the Cabrals, the Tavares, the Mendes, the Lopes, the Texeiras, the Thompsons, the Brittos, the Gomes, the Roses, the Alexanders.

OUR HERITAGE: THE LONG JOURNEY

One of The Oldest Black Owned Family Farms in South Coast Massachusetts.

A. V. Rose Farms is dedicated to sustainable practices that focus on what’s best for our environments and people. Applying permaculture principles to all aspects of life.

Growing all our vegetables, fruits, herbs and flowers without chemicals, pesticides or herbicides. At A.V. Rose Farms we’re committed to regenerative natural farming. Learning from our ancestors and indigenous people, focusing on how to increase our soil health using Indigenous microorganisms and mimicking Mother Nature in order to save our environment and provide food security.

“The health of our soil is directly connected to the health and sustainability of our environment and naturally grown vegetables, fruits, herbs, and wildflowers. which is directly connected to the health of our mind, body and soul. At A. V. Rose Farms we understand that all things are interconnected.  We let Mother Nature do her thing and analyzing how many of our so called “weeds” are beneficial.”- A. V. Rose Farms Inc.